I use Wordpress a lot, and love the product. But, when you are working with something every day, you see its quirks too, such as the Wordpress Media Upload. 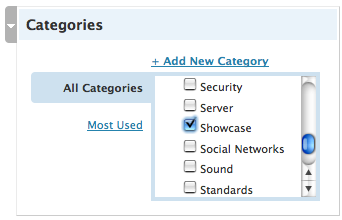 There is some good thinking in here, such as having the “popular categories” filter, but having a huge list of check boxes in a very small area is painful indeed. Scrolling through the list to find the categories that you want it ugly.

The older version actually suited me quite a bit better: 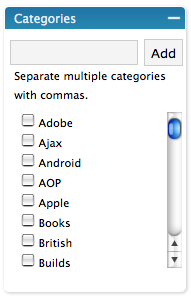 At least here you had the input text box on the top, so you could type in the items, and then you would see them selected and thrown at the top just to let you know. This was much better. The problem was the fact that a Google Suggest-like auto select wasn’t implemented, so you could get the category wrong… ending up with a new one being created. So close. If you were filtered as you typed I would be happy!

It turns out that the tag support does all of this. It auto completes for you, and works well enough indeed. I know that there are plugins that munge categories and tags, but maybe it is time for Wordpress to nuke one of them and just unify.