Hmm, where did the Ajax goodness go?

Recently when you add a friend it inline pops up and takes care of it for you, but as of an hour ago for me…. it reverted to the old school process. Come back sweet non-page refresh!

Actually, it looks like the process is non-Ajax in some cases. Now I can picture ASCII art becoming executable. Imagine a day when this:

can execute and it builds a vector image of itself.

Or, when you use the text layout:

and that builds your CSS layout for HTML. ;)

Being a fly on “The Wall”

One interesting phenomenon with The Wall on Facebook is that you end up watching a lot of conversations between your friends. Since the activity stream shows messages between two friends, it feels like you are a fly on The Wall.

It isn’t like it feels dirty or anything, the wall is a very public place, and everyone knows that. I do feel like the wall is a bit of a weird place though. The UI is always strange when someone writes on my wall. Instead of putting the darn message in my Facebook Mail inbox (or what I really want… send it to my email address so I can just READ IT ;) I get a notification, which I ignore a lot as they are normally to do with someone wanting me to pat a monkey, or get a beer. The apps that make me install them just to GET the thing that was sent to me really bug me too, but that is another matter.

Ryan is posting about how Microsoft and Eolas have settled their patent dispute which caused the need for SWFObject and UFO (using script gets around the patent).

With Silverlight competing with Flash, I wonder if Microsoft will do anything about it and patch IE?

Who would you hitch your ride too? 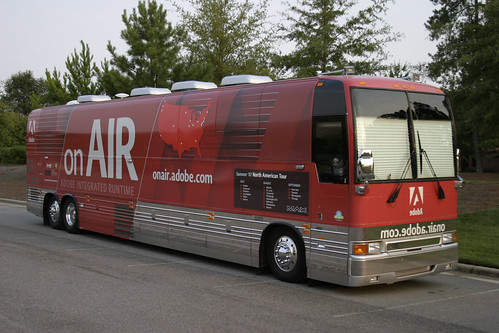 I’ve been testing the new Yahoo Mail on both Windows and Macintosh computers. It has some downsides, but it beats Gmail, in my view, both in terms of features and in terms of its ability to act like a standard computer program rather than a Web page, something for which Gmail often gets more credit.

That was written by Walt in a piece about Yahoo! Mail coming out of beta. Yahoo! Mail is great technology, and I really respect Ian and his team for what they have accomplished, but Walt totally misses the boat here.

The great thing about Gmail is that it RECOGNIZES that it is a web page!

Instead of taking Outlook and putting it online, the Gmail team looked at email and created a new way to work with it. Oh, and the spam filter on Gmail is the best I have ever used, so even if I used a non-Gmail client, I would route it through Gmail for the filtering.

Stick to the Apple promo’s Walt! :)

Face ‘IM: The social graph outside 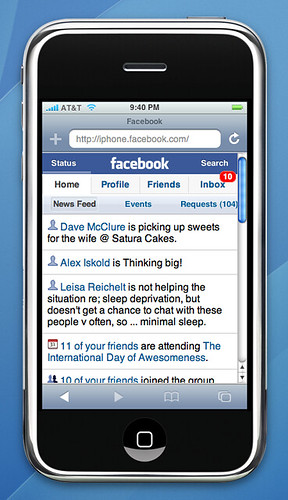 I keep waiting for Facebook, or someone else, to announce “Face IM”, an IM client that uses the social graph that I have already setup in Facebook to manage my IM life.

Another IM system???? Well, they wouldn’t have to run their own service, but could play the meta-role a la Adium/Trillian and use the IM names that the users have already put in. This would all be hidden from the users though, they would just start chatting to their friends. At some point it may make sense to setup Jabber so users without IM settings can play too.

I currently have IM taking up part of my screen, on one of my virtual desktops. All that is shown there is a list of people. Who cares? Instead of showing that list, what if the application looked like Joe’s iPhone application?

A nice clean interface to my event stream as well as my friends. I would probably use that over a tab in my browser. I would give up the view of a bunch of friends names, and instead have rich information as well as the spring board to IM.

Of course, just like Gmail, you could tie in the IM system to the Facebook Mail system too, and they could even get all Meebo-y if they wanted.

I am more interested in taking the social graph outside of Facebook.com. The platform is about more than the walled garden, and showing this via Face IM would be great.

SLF4J: Now you can do logging in Java… oh wait!

I had to giggle a little bit here. When commons-logging came along to abstract your logger which abstracts your println (I know…. you CAN write an appender that sends you SMS messages and launches rockets) I thought “wow”.

Only the J2EE community would architect twelve levels of abstraction to handle a filtered logging system.

After years of use we realise that the last level of abstraction doesn’t do anything for you… but instead of just ignoring it, we have a new one!

The non-Apache follow on to commons-logging is SLF4J. It does things right: Logger, not Log. Better yet, Logger is an interface (it’s a class in Log4J) which makes my EasyMock-addled brain quite happy. Finally, SLF4J takes a very simple, very sane approach: you combine the API JAR with one of several implementation JARs. That’s it … no class loader magic, no dynamic binding. This is an ideal solution for those same 99.99999% of applications out there.

Maybe someone could write an abstraction layer on top of commoons-logging and SLF4J…. you know, so you could switch between then without changing the interface.

The day started like many Palo Alto Saturdays. First, I met John and his lovely family at the farmers market and we took the kids over to the crepe place. In line we ran into Brian McCallister of Ning with his baby. I didn’t get to ask him if he got to go to the playboy mansions now that PlayboyU is running on the Ning platform :)

Later on, I got to walk over to one of the Facebook offices in downtown to participate in the Facebook Developer Garage. There was a great crowd gathered (no surprise) and their was definite energy about the place. The kind of energy that says “man, I think I can make some money having a lot of fun” ;)

The event was pretty casual, and started with “Platform” Dave giving his view of the world. Since no-one had a camera at the time, and mine was in my backpack, I pulled it out and filmed the talk. I had to split it into three parts (first show below: 1, 2, 3) for YouTube.

Then it was time for the Slide folks to give their piece, and I filmed that (two parts).

The real fun started with the lightning talks that came next. They were given by the developers of major applications such as iLike, SuperWall (RockMe network), BoozeMail, Causes, Box, and more. Unfortunately I had run out of battery at this point, but luckily someone else had a camera at this point.

Some of the gems were:

A really fun event. Thanks to Facebook for putting it on.