Ode to the other Curl 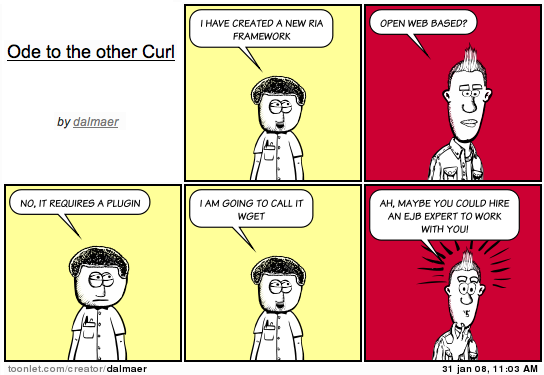 Richard Monson-Haefel has left Burton Group and joined Curl as VP of Developer Relations. He is now out of analyst land and back in the real world that doesn’t have charts with quadrants.

He also created a new blog without redirecting the old one :)

Rotating Java and JavaScript on the Server I was chatting with someone about how, in 2008, you could build an application with GWT on the client side, and Rhino on Rails on the server side, and how that would mean flipping the roles of Java and JavaScript. Of course, this would be a flip BACK to the past:

My interview with Steve Yegge on Rhino on Rails

I have been a long time follower of Steve Yegge and his long blog entries that manage to keep your attention. He has the opposite style to me (I know how curt and bad my writing style is!), so I envy it a little.

Ever since he presented on the ‘Google Rails Clone’ at FooCamp and posted about the internal Google Rhino on Rails project, people have been curious to learn more.

And of course, the big questions:

When do I get to see it!

I happen to be in Seattle at the Google offices, so I was able to ask all of these questions and more. Steve was a fantastic host, and I really enjoyed chatting with him.

This is the kind of video I want to explore at Google. We have many great developers working on cool technology. I want to get them on camera, participating with the community when I can. Sometimes we can talk about products and APIs, but sometimes we will talk about fun ideas and projects that we are working on such as Rhino on Rails.

Anyway, give it a watch and let me know what you think: Diggnation, and other Revision3 content will be shown on select Virgin American flights.

I think this is great. I remember watching a show on technology awhile back. It was called “Something World” where Something was the guys last name. Apparently he made a mint from that show.

I am really glad to see Revision3 continue to grow. I got to see their studios and they are top notch. It was fun to see how they do their thing and use bleeding edge equipment. I have no doubt that they will continue to grow.

The cartoon itself was just a bit of fun, picturing your grandma turning on Diggnation :) I sometimes catch myself on the slippery slope of @foo and d foo. I also wish that it someone @dalmaer’s me, it showed me in a better way.

This is the reason that Jon has given for why he is leaving ThoughtWorks and joining Google.

I am really excited to see Jon join. I met him at an AOSD conference and we shared a train trip back from the middle of nowhere to London. I immediately liked him for so many reasons. Anyone who I can have a good laugh with is right by me, and he is smart to boot.

I hope that we get to work together in some way, allowing me to sneak to Down Under to meet up with him. See you in Mountain View shortly though mate!

Of Fonts and Men

I am font overloaded.

First, I kick on a movie on type faces, Helvetica. Just imagine for a second this exchange with the wife:

It was actually interesting to see the designer types say exact opposite things about the font, the art of typography, and design:

Then, Ben goes and writes about Of Fonts and Java2D in which he picks apart pixels, as he is want to do.

He lists some of his favourites, starting with the Helvetica wannabe, Arial:

Good to see you blogging again Ben, and why wasn’t Helvetica on your favourites? :) Build your own Reddit is cool, but I don’t want my own! 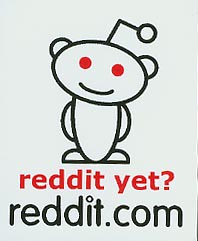 Reddit has launch a beta that allows you to build your own Reddit as a subreddit (a la programming.reddit.com).

The thing is, I don’t want to create dion.reddit.com. Instead, I want to narrow down the existing reddits to my circle of friends. When I look at a Digg or a Reddit, I want it to show me the “important” news of the day with me at the center of the bell curve. Use my friends of friends.

The Consultants: Inverting Your Control 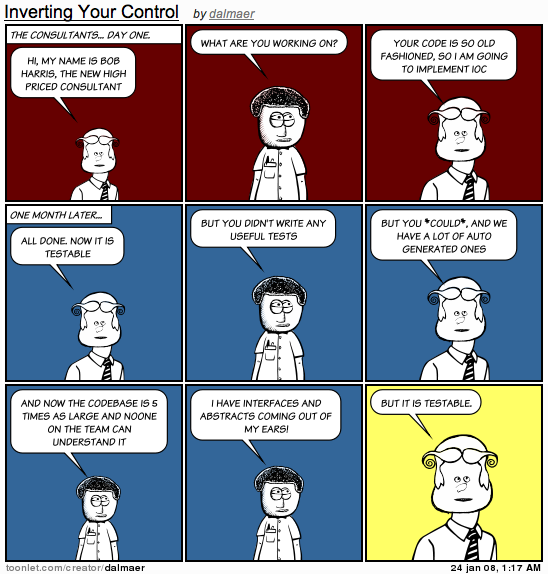 Have any of you gone through some time “cleaning up your code” only to realize that it was actually easier to understand before hand?