It’s 3am…. can your Web framework handle a diggin? 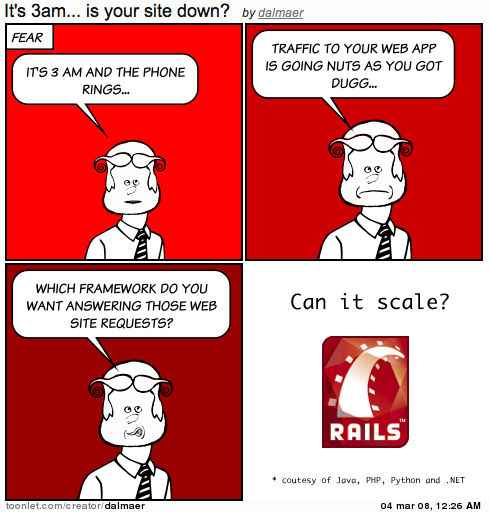 I hate the fear ads, and seeing the Clinton one was sad to see. Showing pictures of kids etc… are you kidding me?

I know Hilary is scrapping for her life, but still. I really don’t understand the experience line too, since she has only been a Senator for a few years. How she comes up with 32 years baffles me.

Anyway, it all reminded me of the fear-monging around Rails scaling.

My interview with Steve Yegge on Rhino on Rails

I have been a long time follower of Steve Yegge and his long blog entries that manage to keep your attention. He has the opposite style to me (I know how curt and bad my writing style is!), so I envy it a little.

Ever since he presented on the ‘Google Rails Clone’ at FooCamp and posted about the internal Google Rhino on Rails project, people have been curious to learn more.

And of course, the big questions:

When do I get to see it!

I happen to be in Seattle at the Google offices, so I was able to ask all of these questions and more. Steve was a fantastic host, and I really enjoyed chatting with him.

This is the kind of video I want to explore at Google. We have many great developers working on cool technology. I want to get them on camera, participating with the community when I can. Sometimes we can talk about products and APIs, but sometimes we will talk about fun ideas and projects that we are working on such as Rhino on Rails.

Anyway, give it a watch and let me know what you think:

Rob kindly kicked in some podcasting time when he was at RailsConf, and I sat on the content for far too long. It didn’t really fit right on Ajaxian, since Zed only talks about Ajax a little bit, but it was fun content and I wanted to get it out there, so I finally published the interview with Zed Shaw on the Rails community, the role of the Enterprise, the state of Ajax, JRuby and Rubinius, documentation, tests, tooling, the role of patents in software, and a whole lot of opinion.

it is interesting to listen to Zed in the wake of his Rails rant, as you see some of the seeds of that rant, but hearing them with a real voice is a lot different to the harsh medium of the pen. It is softer to hear someone jabber on, even if he still swears and has very strong opinions indeed.

People like to pick sides, but I am trying not too. There is some truth in there, and things that the Rails community can learn from at the very least. Then again, I haven’t been personally abused in his rant so it is easier for me to take than someone who was directly attacked.

Listen to the interview directly, or subscribe to the podcast.

Since the Zed Shaw rant, everyone has been coming out of the wood work to say one of:

Tim Bray put his predictions out there, and Joe Gregorio responded.

One of the core problems with predicting the future, is knowing the present. When you look at “how successful Rails is” people use varying metrics:

Obviously, they are all minor data points. To talk to Joe’s Google Trends hypothesis, you normally find that a technology takes off at some point, and lots of people start talking about it. Many of these people are not even using the technology. Some are checking it out for the first time. Some are ranting against it. A lot of this kind of talk has died down and Rails is maturing.

I am not going to predict anything about Rails. Who cares? We are seeing more projects coming online, and I have seen successful projects rolling out. When I do a new project, Rails is a serious contender, but sure it isn’t the only one.

More live applications will be launched on Rails in 2008 than in 2007.

The Point: Social networking to do something better than bite people

I met Andrew Mason of the new website, The Point, which is a Rails based application that is trying to bring the people together to make a difference. When people organize in huge numbers, they can change the world, and this site enables you to do that, or something much smaller.

I just saw that Mashable had a chat with Andrew, so I thought I should post a little walk through that I did of the site.

I think they did a great job at creating a simple to use experience, and it has Ajax in all of the right places, and not in your face. You see the usual suspects such as a nice and simple signup system. You know it is Web 2.0 when you see the tag cloud too (although I am not a fan of tag clouds).

I really like the idea of creating contracts around actions. As I talk about in the video below, this can range from the small:

And, everything in between. I am excited to see how this takes off, and if people really see this as a community where they can get together, make something happen, and most of all… see HOPE. It is hard for one person to make a change, but if we get together, anything can happen.