I have been taking in the news and constant amazement as the “HP webOS” situation changes in front of my eyes. A month ago we had folks from HP saying that we are staying the course and great devices are coming soon, and now we have utter chaos. I don’t know what HP’s plan was, but man…. surely it wasn’t to be executed as badly as this.

I feel so bad for the webOS userbase, developer base, and employee base. They have been left in the lurch again. Shocking, really.

It has made me look back at my own career and think about the good times and the bad. As I reflect on my experiences, I definitely see a trend. I have felt the most frustrated when I know that we didn’t “play to win” and were too conservative. My successes have come from projects and products that had a strong vision and we went all out for it. The funny thing there is, even if the outcome wasn’t a home run, great things came out of it.

I don’t think that either Palm or HP were anywhere near aggressive enough, and I can look back at early meetings that Ben and I had with folks where big ideas were shot down for being too risky. Many of the folks at the top wanted to be another Apple, and you can’t fight that war. Android has been so successful through a) hard work by engineers and b) a disruptive and very different business model. Java is yesterdays technology though, and if we saw webOS at Google I think that Android would have been even more than it is today. The interaction model is vastly superior. This doesn’t mean that the user experience is superior. I can’t say that is the case because webOS hasn’t performed well enough. It has been too slow and buggy, and it pains me to say that. webOS 2.0 was a case of second system syndrome to the extreme, and if we had instead had folks sitting in a darn profiler, we would have ended up at a much better spot.

I think that the only real hope for webOS is not for an HTC to come along and make some hardware for it. It needs an owner that cares and will push the hell out of it. The only owner that I really see is Facebook of all people. They very much have a culture of playing to win, they are making large bets on the Web. They need to do so, as the last thing they want is for an iOS/Android duopoly surrounding them.

They could take webOS and do some very interesting things with it. Imagine an open source webOS that could run on top of Android (hint: I may have seen this before). This way, your system can be installed by the Android user base, and Android apps can even run on it. They may not run perfectly, but who cares…. you get access to that application base and you can kill the “number of apps” arguments.

Why stop there? You can run webOS a la iCloud, but even more so. The entire experience is in the cloud, and the synergy concept can now truly go where ever you want, even onto iOS and Android. The core WebKit platform could join the PhoneGap project. Now the Web gets a massive boost. Instead of waiting for the Web features to trickle into the Android and iOS WebKit implementations, we could rally behind a WebKit (or Gecko if they work with Moz!) platform that you can target on any platform. Chrome Frame for Mobile. We need it to compete.

There are some great engineers who (very kindly imo) stuck it out for love of the platform and their teams. However, many great ones have left too. So, whoever comes in needs to rebuild the team.

It is hard for HP to come in and recruit talent, especially now, but Facebook? If they step up to the plate with a killer vision and stock options to boot…. wow. I can see the team now. It is amazing. It has many WebKit engineers (which are much much needed). If I was a college for computer science I would be spending as much time with the WebKit code as possible :)

It would be a crazy big bet for Facebook, but they have the funds and cojones to pull it off. As great as the Web is, it needs a lot of help on mobile devices. iOS is fantastic and has a great mix of a high level language in Objective-C with a fast low level runtime (especially with ARC). The Web is a very forward looking solution. We need a lot of engineers to keep accelerating it, but that is happening. The JavaScript runtimes are on an amazing streak. We are getting better and better graphics and low level APIs made available.

Man, I would love to see someone really give it a shot, and go for broke. HP’s fire sale will get some users in the field, so someone can swoop in and take advantage of it.

Facebook actually has a fair few engineers and execs from Palm over there, and what about Amazon? They have made a big bet on Android, and are going gangbusters on being the company that makes money off of Android. However, if they went webOS on top of Android? Oh, and Jon Rubenstein is on the board of Amazon (which always seemed a bit weird to me!) Maybe Amazon and HP could at least be good partners.

It is so easy to nitpick on UI…. but this one gets to me everytime, and doubly so that it comes from Apple (known for user experience). 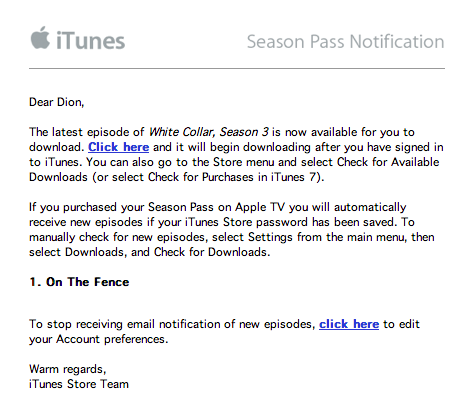 There are two links in the email. One is at the top, and the other is after the header showing the name of the show. The one next to the show sends you to preferences rather than downloading the darn thing! Both are “click here”.

How about a big link/button: “Download your show now”.

Is this just me?