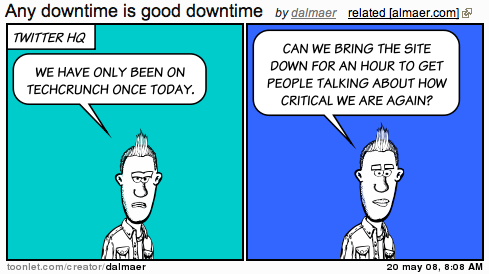 I wonder if the downtime that Twitter has, may have been a good thing in some ways. It gets people riled up, and we all rant about how it is crucial that we have a Twitter that is up. But, it isn’t down enough to make people switch to Pownce, which doesn’t seem to go down (or at least you don’t hear about it) so it therefore doesn’t get in the news.

I wish we could have a parallel universe that could compare the growth of a service with zero downtime versus a touch of it, in this case.

9 Responses to “Using downtime for publicity”