Using downtime for publicity Microsoft is Thinking in Flex; I like to read my feeds though 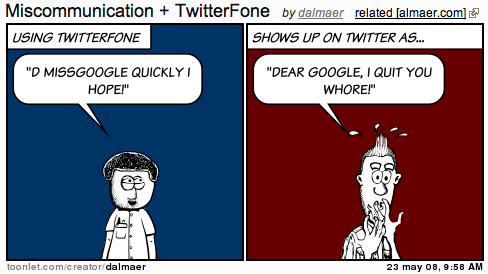 I like the idea of TwitterFone. It would be nice to be out and quickly call in a tweet. I got an invite, and tried it out this week, and then remembered that voice recognition is really hard. Doesn’t it always seem to be one of those technologies that is “10 years out.”

My test tweet occurred after Man U beat Chelsea for the Champions League trophy.

I’m really excited that Manchester United won again today but I can’t believe that it went to penalties.

and I saw the following in my twitter stream a few minutes later:

I’m really study the dimensions unit one again today but I can’t believe that it went to penalties.

To be fair, they did pretty darn well. It is hard to expect them to know something like Manchester United. Unfortunately, even though they did well, it would be hard for anyone to understand what I was saying.

I then thought back to Twitter Translate. In that case we are translating between languages, and it is also often “off”. However, you can normally work it out, and there is a key difference. I expect that if I translate something that it will be a bit off, and I will cope with that. However, something like TwitterFone is happening without the consumer knowing, and thus it comes across as gobbledy gook as they don’t have the context (other than seeing “twitterfone” if they look carefully).

It seems that there are many use cases where it is OK that translations of some kind are “good enough”, and others where it does matter. You could get into trouble too, such as the comic above which messes up the “d” for direct message and changes it slightly so you say something totally different.

You could go from: “I like yoghurt and peas” to: “It hurts when I pee”.

Then there is the 140 character issue. It is impossible to do the math as you are speaking a sentence, so you will often run on.

Nice idea, but we need the technology to get to the next level for this kind of input to be used in a case like this. Using it for GOOG-411? Perfect… you can keep saying the same thing again.

One Response to “TwitterFone: Voice recognition can be dangerous here”