The new attack on the RDBMS Why hasn’t Sun created Sun Mesh?

The future of HTML, XML, and Java look similar 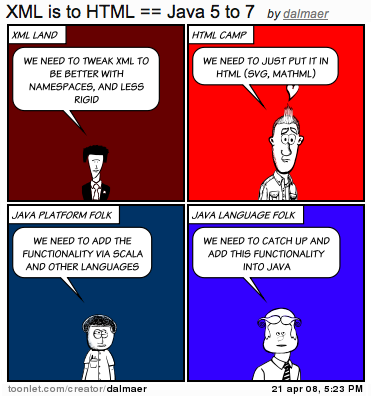 I had a really nice chat with David Orchard, Kevin Marks, Brad Neuberg, Chris Schalk, and Dick Wall (all but David are fellow Googlers) and it was funny to see how the world of HTML / XML and Java planning sounded familiar.

On the XML and HTML side you have the tag soup HTML folk who want to be practical and just SVG and MathML going, so put the darn stuff in there. On the other side you have the XML camp thinking about how to be smart and auto include namespaces, and relax requirements such as “When you see the first error, DIE DIE DIE” which makes XML impossible on the Web.

Then you look at Java, and see the growing pains there, and the desires for Java 7. The Java language folks are keen to keep incrementing the language with all of the cool stuff people are enjoying else where (Closures and the like). Then there are the Java platform folk who think that we should keep Java simple, and that adding all of the cruft does the opposite. Their solution is to use Java as a platform and use JRuby, Groovy, Scala, and any other language to develop functionality.

What camps are you in? I am in the HTML 5 and Java platform camp, as you could probably guess.

3 Responses to “The future of HTML, XML, and Java look similar”