Sorry, we cannot support uploads sent via email. Upload photos from your iPhone with our free application, Facebook for iPhone:

This is the message that I now get when I try to use the Facebook feature of emailing photos to my account. For a long time, I have emailed an alias on my domain which forwards on to both Flickr and Facebook, get to get photo into both places at once.

My blog brings in these photos from Facebook using Fotobook. Now I can longer use this workflow. Instead, Facebook wants me to stop using the “open” import mechanism of SMTP, and instead wants to force me into the mobile walled garden of the Facebook app on the iPhone. Now, don’t get me wrong, the Facebook iPhone app is fantastically produced by Joe Hewitt, and I have no beef with it at all. I just don’t like being forced into one workflow which will then only work with that one provider. Facebook, by taking away a feature, changed the entire game.

Open protocols give us the ability to develop our own patterns, and tweak the implementation over time. When blogger (and others) allowed us to abstract the implementation behind DNS records, it felt better (as well as being able to export the data out).

There are advantages to the walled garden though. I have been really worried about seeing Facebook Connect buttons shown up around the Web. The UX for FB Connect is very nice indeed, which is why I was so worried. The majority of people won’t choose the Open platform purely because “they should”. Open needs to compete on its own rite.

This is why I was so pleased to see Open Connect: 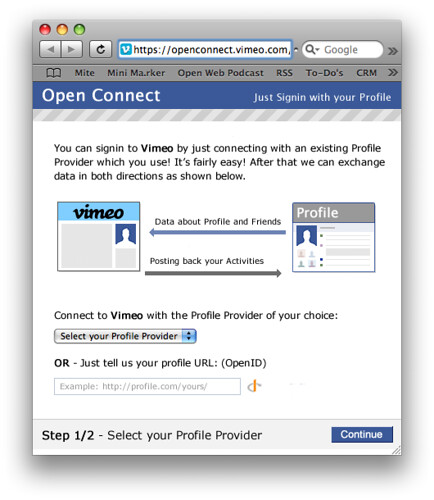 We need to do this quickly, as people will only put “one” of these on, and it should be the open meta platform.

I think that there is a place for the browser to help out here too, as I have mentioned before. If you login to the browser once, and we agree on the protocols, the browser can do the handshake for us. A great UI….. none at all.

Time to “make the Web better” instead of how Facebook tries to “make a better Web”.

Loopt, I just can’t do it again; My friends are out there 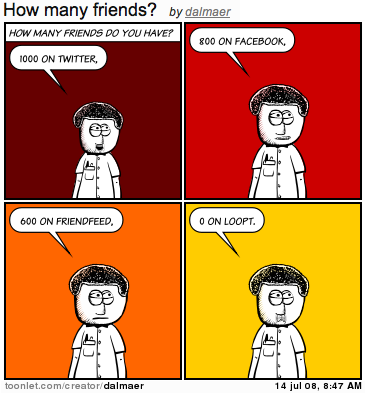 Loopt looks very cool. I downloaded it early on for the iPhone 2.0 software, but after I set up an account I saw the “Invite Friends” step, and I just couldn’t do it.

Even though the service ties into my iPhone contacts, and online allows me to blast my contacts on Gmail etc (although not using the Google Contacts API so you have to give them your email password which is a password to everything since people can “forgot password?” you) I still couldn’t do it. I couldn’t ask my “friends” to go through yet another process to show that we are friends.

I have noticed this from the other side. Plurk comes out, and you get a set of emails from people asking to connect. I don’t need another Twitter, even if it scales.

You start to see the same faces again and again. FriendFeed asks if Bob is your friend. Yes, yes! He is my friend on Facebook and Twitter!

Where is the magic “just do it already” button that takes this over for me. Where is the data portability + with ease. Everyone needs to do more, and there are hard problems there, but I am slowing down on services until it happens.

I click on less as they come in. And, I take less time to go and friend back the person, again even if I have already done so on another service. It’s just too much.

So, sorry Loopt. It isn’t you, it is me. I don’t have the energy to do it, so I will leave my account up with 0 friends, and as the odd people find me I will accept, but I am not going to go after anyone…. until the systems talk to each other and I don’t have too. 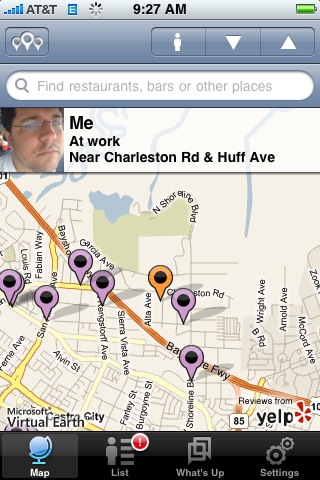 This showed up once again to me today as I had to do a double take on a sponsored piece of content in my mini feed:

Hmm. Why is this strange? Well, Bill Scott is the UX dood at Netflix. This ad makes it looks like he is endorsing public enemy #1, Blockbuster. I haven’t emailed Bill, but the case is probably more that he wanted to give it a looksy. Who doesn’t?

What is Movie Clique?

Next we will see “Steve Jobs added the application Windows Vista” and the like. 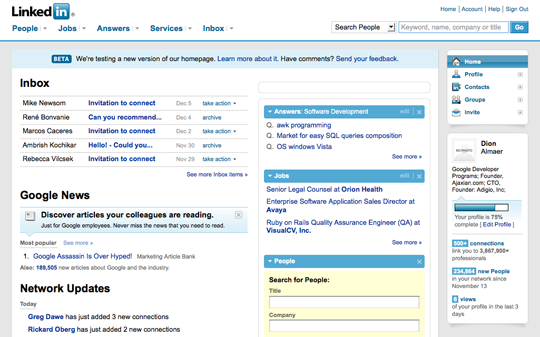 I saw the updated LinkedIn home page. What is really new here?

Discover articles your colleagues are reading.

That could become interesting. I like the idea of seeing my own personal Digg, so LinkedIn could do something there.

The “modules” allow you to plug and play…. but for now with only a few options (Answers, Jobs, People search). You can see how it will make sense to open this up to developers in the future.

The network connections portion shows me what is wrong with LinkedIn. On Facebook I can see interesting things that my friends have done. On LinkedIn, I see that a connection has added another 6 connections. Who cares?

OpenSocial: It’s a programming model, not a federation, for now

To say it has been amazing to watch OpenSocial come together in recent months is an understatement. OpenSocial isn’t a product that Google came up with, it is a standard. At first you have to get a large number of groups at Google to agree to the core ideas, and then came the partners. Working with the partners has been a real trip too, and the speed of development as well as decision making is truly astounding to me.

I knew that the press will jump on this as “a Facebook killer” or “Facebook vs. Google”, but that is b.s. Applications that are social can be better and we have only seen the beginning. F8 has opened up a lot of eyes, and many companies are going to innovate in this space.

Take a look at what OpenSocial really is. Check out the APIs. Understand that this is the beginning of something. The first set of APIs mesh closely with Gears, as I talk about on the podcast with Patrick Chanazon. There are a few core services (people, storage, activity stream) that have GData endpoints that you can access, including the core JavaScript library which is how development is generally done at the moment. The libraries will look especially familiar to Google Gadget developers, as they are similar in philosophy. To me, this isn’t about some huge new platform, but rather a set of components that people can use. Gears is the same way. You have three key components (as of now): WorkerPool, Database, and LocalServer.

As a Java guy Patrick and I even joked about how it felt a little like some of the Java standards in that this isn’t about “write once run everywhere” but is rather “learn once use everywhere”. OpenSocial has the concept of “containers” where these APIs run. This is where container partners such as Bebo, Ning, Hi5, a ton of others, and, oh MySpace come in. opensocial.newDataRequest() everywhere.

The API is at a point where there is value to using it, and having one API that containers implement allows a developer to develop against it, knowing that they can move their app around. On the other hand, containers can add to the API to give specific information that you may want. For example, if your container has a lot of music information you can share that, and if you are building a music app, that could be a good thing. There is a core set of APIs, and containers will add their value on top, just as WebLogic did through deployment descriptors :)

Back to Facebook. I actually don’t think this is a bad thing for Facebook. It validates the market, and will grow the entire pie. Now even more developers will think about developing social applications. Facebook has a lot of users hanging out on that network, and they are the kind of users that are used to installing applications at this point, so I think that a lot of developers will write applications than run across FB and OpenSocial and beyond. Having MySpace along for the ride is big, and maybe Facebook could join in too and we could create a true standard that the community pushes forward.

It has probably stirred up the FB folk too. They have known that this is coming. Competition is obvious, and I hope that OpenSocial can help push Facebook into getting increasingly open too. They sometimes get a bad rap there, and we keep forgetting that they opened up F8 only *months* ago, and are still working out what it means to open up a platform like this. It will take time and there are a lot of hard problems. As great as collaboration is, there is also a PC vs. Mac debate here. Facebook can run like the wind in their own direction. This could end up being a fantastic product. On the other hand the group could also run quickly as they have been doing, and instead of being stuck in standards hell, they could produce something just a great, across many containers.

Should Facebook implement OpenSocial? I personally think so. Why?

It is going to be an interesting ride, and I hope that people don’t get sucked into the press too much and really check things out. With everyone jumping on board, I wonder what is next. Can we get to the world that Brad talked about? Will we get a federated world? There are some hard problems to solve.