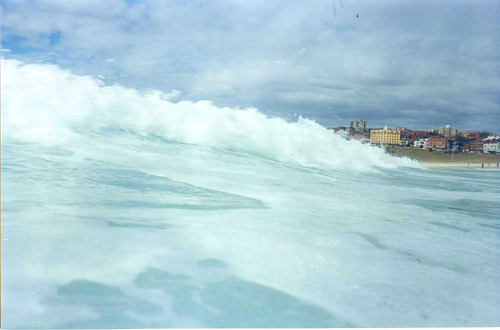 I remember talking to a friend who joined Google and the Wave (then Walkabout) teams in Sydney. He talked about how he was excited to push the Web in crazy new ways and that he was shocked at how far they had gone. He also said “but I have no idea if people will use this.”

Google-haters will make fun of the fact that Wave hasn’t been a commercial success. “See! They are a 2 hit wonder! Search and Ads!” However, I think that Eric’s spin rings partly true. Google had the balls to do it. They let Lars and an awesome set of engineers take a run and rethinking the way that we communicate.

This is an incredibly hard proposition. Many people live in their email (I know, I know, the kids live in FB mail right?). I find myself loving a Gmail plugin whilst never getting into Wave. Incremental, evolutionary improvement often wins on the Web. The revolutions are hard, but that doesn’t mean that people should stop trying them… and Google has the $ and the need to scale their businesses.

Wave, as well as giving great demo, has brought a lot of cool technology into the commons. Other projects like Novell Pulse and the like are using it. When I was working on Bespin I really wanted to see a world in which Bespin could run on top of the operational transform abilities of Wave. Good things will come of Wave. The engineers have learned a ton, and that will go throughout the company to their other products. Making Gmail incrementally better will be huge. There is the large Google Buzz team making a run for social (a touch play when competitors have massive mindshare and user bases).

I also wonder about Etherpad. That great team shipped off to Sydney to join Wave. I love Etherpad. I still use it at typewith.me and at other clones when that goes down. The vision of Etherpad was smaller than Wave, but incredibly useful. I hope those guys land well. The entire Wave team is top drawer. They were ahead of the game this time around …. and timing is everything.