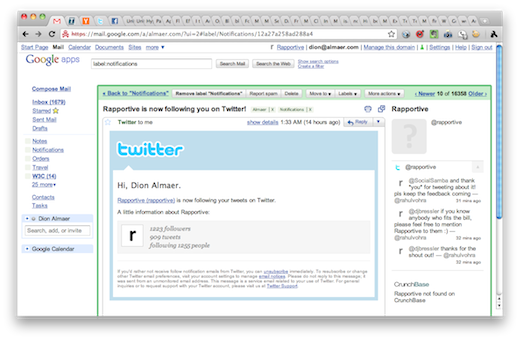 I can’t tell you how much I love Rapportive, the service that makes Gmail better by taking away the ads, and adding in useful information about the sender (teh social).

I have played with “social email” type plugins before, but they always tried to do too much, and rarely anything useful. Email is important to people. You tend to live in it. So, if you have an “add-on” the best thing to do is to quietly whisper useful information into the email users ear as they go about their business.

Once you install Rapportive, your email life instantly changes for the better. When I get an email from someone new I suddenly get a face to the name (via the profile picture), a feel for who they are (from their social updates), and more.

There are other fun side effects. I have had a few spammers de-cloaked for example. In general I feel like I have a leg up in a new conversation. Email feels different to me. I would hate to have it taken away…. which is a great sign.

The team behind Rapportive is equally awesome. They came from the great hacker dojo of Y Combinator, and other investors have come in behind that…. including Mr. Gmail himself.

There are a series of emails that I get that come from the same email. A lot of them fall into my “notifications” tag: Follows from Twitter, messages from Facebook, comments from Wordpress, plans from Plancast, etc.

Until recently, Rapportive hadn’t really done much for me there. Then, the team started to show information from the website of some of the companies behind these messages. I then reached out and said, what I really wanted was more meat that could be gleaned from the email. My use case was Twitter. When someone follows me, the more info I have on them, the more likely I am to follow them back. Twitter improved their template email a few weeks back (although for some reason it seems to have reverted for me recently?) but they don’t put in recent tweets from the person. I can see why: spammers would LOOOOOVE that feature. However, I would love to see it as I decide if I should reciprocate the follow! Rapportive could dip into the email content, parse out the fact that @foo has followed me, and show me their Tweets.

I don’t even think it was a full 24 hours later, and @rahulvohra their CEO, let me know that the feature was in place. I tested it…. and it was.

How about that for service.

ps. I love that Rapportive is an extensible platform. You can write “Rapplets” which are plugins for that right bar. E.g. load in Crunchbase information. I do find that some of these bug me when they say “Bob not found on …” when I would rather just not see anything.

I have a bunch of ideas for Rapplets, and after the great response from the team, I have every incentive to writeup thoughts on how to make the service better too. If you use Gmail, you should get this plugin.

pps. It is great timing for someone to build this service. We have had good ole microformats for awhile, and now with Web Finger integration here and there, let alone various services that key off of email, it is coming together that you can actually get a lot of good info based on just an email address.