Will it happen again? 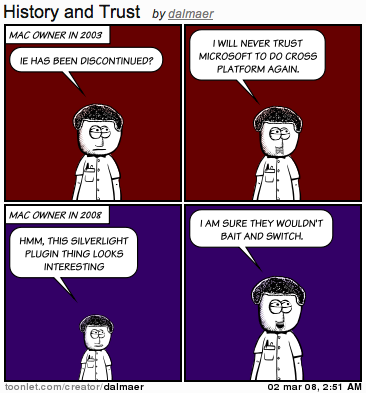 Microsoft stopped IE and messenger. Roz got on stage for years promising a native Office, and then when it gets here it is disappointing.

I like some of the MS stack. Expression Studio, Visual Studio, Silverlight, .NET, all promising.

It could have been for good reason (e.g. Safari really was decent then…) but, what about the trust?

And, when I see people the Olympics and the Library of Congress even signing up for Silverlight content? Erg.

5 Responses to “Will it happen again?”