Will it happen again? Will APIs effect mergers and acquisitions? 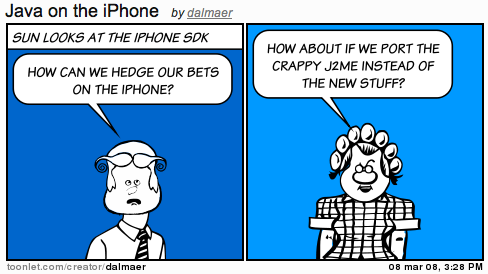 Paul Krill reported that Sun has looked at the iPhone SDK and thinks that it can port Java to the iPhone. It will be placed up on AppStore as an application, so I wonder what the user experience will be for apps that actually run Java, especially for the first time on a phone that doesn’t have it installed.

Don’t get me wrong, I want Java on the phone, just like I want full RubyCocoa, PyCocoa, CocoaJS, and any other language that you fancy.

Only one iPhone application can run at a time, and third-party applications never run in the background. This means that when users switch to another application, answer the phone, or check their email, the application they were using quits.

This makes me worry about Java too. Startup has never been a good point of the JVM. If I flip to a Java app am I going to have to wait for the bugger to startup? Is there going to be a way to load one VM and keep it loaded (doesn’t seem like it).

It seems like this is just a guideline and not a firm issue:

I’m a programmer and I just tried it [using the iPhone SDK] and you can keep your app running in the background in the normal way ApolloIM and iFob do it. I.e. overriding applicationSuspend.

Even more worrying though is this part of the developer agreement:

3.3.2 An Application may not itself install or launch other executable code by any means, including without limitation through the use of a plug-in architecture, calling other frameworks, other APIs or otherwise. No interpreted code may be downloaded and used in an Application except for code that is interpreted and run by Apple’s Published APIs and built-in interpreter(s).

Although it has been suggested that this is to stop non AppStore code, it seems to go a lot further than that.

Open source and the iPhone

Also, Mark Pilgrim has written up thoughts on whether iPhone apps can be GPL:

Since all iPhone apps must be distributed through a third-party (Apple’s “App Store”), that would make Apple the “distributor.” Which would mean that Apple — acting as the distributor of GPL-licensed object code — must provide source code or a written offer to provide source code. It’s analogous to a Linux distribution — they distribute binaries of upstream GPL programs, so they need to host the source code as well.