View Source Improving: From Linkification to Discovery Being a “power user” really sucks sometimes as iPhone 2.2 reminds me

The Flash Platform: How Adobe could join the Open Web to take on…

With Adobe MAX kicking off today, on the back of PDC, we get side by side comparisons.

We have heard talk of the new positioning of the Flash platform for Flash, AIR, and Flex. These have always been in the platform business unit, so nothing is really new there.

Adobe (via Macromedia) has traditionally been a Web designer company, but developers haven’t jumped in to the same degree (note: not to say they haven’t been wildly successful!). I think that the perception is something like this: 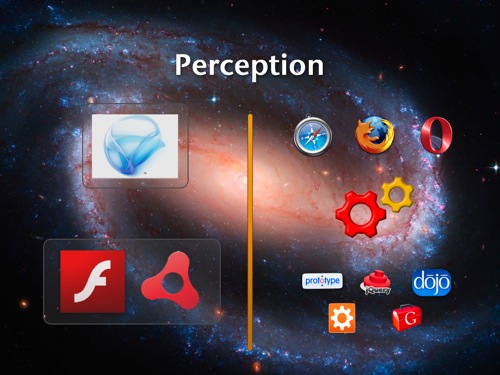 With Silverlight making a huge charge I worry about a world where you have “Best viewed in Silverlight and IE” (which in fact is “only viewed in…”) and people often ask: “But isn’t Flash just as bad?”

Adobe has an opportunity here. They can move to the right and Flash could become strongly in the Open Web camp. Then we would all be stronger as we come up against Silverlight :)

The conversation tends to end up with opensourcing Flash, which I think will happen at some point through necessity, and the sooner the better (for everyones sake). Flex has a loyal base and has some open source help, but hasn’t gotten the love that it could get because it sits on top of something that isn’t open source itself. It is hard to get excited about an open source tech that sits on top of the same vendors proprietary platform!

There is much more that Adobe can do other than open sourcing Flash though. There is a chance to offer tools to help the Open Web. What if Flex could render to the HTML platform?

I hope to see a glimmer of this vision in the keynote and more at MAX. I have a huge respect for everyone I have worked with at Adobe, and I hope that the Open camp wins through, although it will take time.

I really hope that the real Flash Catalyst will be helping the Open Web developers too :)

7 Responses to “The Flash Platform: How Adobe could join the Open Web to take on…”