The Ajax Revolution: From UI responsiveness to functionality and beyond Using FriendFeed for it all, broadcasting to Twitter for the users 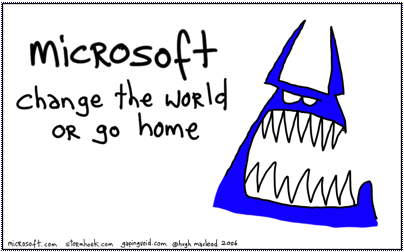 I have had the pleasure to be at PDC this week and Microsoft put on a great show. As they showed their vision of unification around Windows (cloud, Web, PC, mobile) through great developer tools, there was excitement.

Windows Azure looks great. The “on premise” feature looks particularly intriguing. If they can bridge the data center and the cloud, they have something quite compelling. Enterprises are struggling with the cloud in part. What do you put up there? How do you secure it? How do you tie back? Microsoft is going after that problem.

I am curious about the details. Ray talked about how you get to “leverage your skill set”, and showed mappings between the Windows platform and the Azure one (SQL Server – SQL Services). How similar are they? Surely there are limitations when you are in the cloud (App Engine has restrictions on request timeouts, file sizes, threading, and other APIs). Running unmanaged code? Virtualization is good enough that you can just do that these days huh. Impressive. Again, what are the limitations? You can imagine people deploying platforms if this is Open enough. E.g. platforms that are currently in C, or C#, Ruby (IronRuby), Python, (IronPython), …

Have they got SQL Server so it “just scales”? I noticed that the demos that ChrisAnn and Don Box did with SQL services dealt with XML tuples of data when inserting data, and LINQ to get data out. I am excited to hear more of the details.

In fact, I feel that way about a lot of the things that were released. I want to dive in more. Many of the talks stayed very high level indeed. Ray Ozzie was a good speaker, but spent a long time talking about the history of computing to put things in context. I get it, they have to do that for the press etc. They are setting a tone of “this is where we are coming from, this is where we are going.” For developers though, I wish for once someone here, or at JavaOne, or at MAX, (whatever) would stand up and say “Ok, let’s build some amazing things in front of you and show you what we have done with our tools and platforms.”

Don and Chris do that in their talks and people love it. They were on form as always this time around, although I wish that instead of showing AtomPub, they showed us Oslo, M, etc. I know that Douglas talked on that later, but I would have loved to have had that content in the Don/Chris show. I enjoyed it, but when it was done I thought “wait, did I just sit here for an hour watching manual HTTP?” Don’t get me wrong, showing the path from local development, to running on your on premise server, to the cloud is compelling, but I wanted more :)

Everything that was announced we pretty much knew was happening. From the cloud, to the Web (Silverlight 2 / IE 8), and beyond. But, even though we knew about this, I don’t know if we thought they were this far along. Microsoft is executing. This show set the stage “this is where we are going, and look how far we have come.”

The Office on the Web demo showed that. Works in all browsers, with enhanced Silverlight support. Very nice indeed. What a wake up call to the rest of the Web?

And, what about tools. The WPF version of Visual Studio 10 looked fantastic. Having a plugin model that makes it so easy to interact with the editor looked snazzy and useful indeed. I have long wanted to separate the source code from the visualization of that same code. The source code in the repository can have curly braces on separate lines, but I will see function() {. In my world, comments in the style of “<author>Dion Almaer</author>” will get converted to “Author: Dion Almaer” and made small.

If you are a Microsoft developer you are probably very happy at Ray Ozzie’s coming out party. Others on the fence may be interested. For those of us who worry about handing Microsoft control of the browser, plugins to other browsers, the cloud, the server model, and more…. I won’t lie to you. I am cautiously observing. Silverlight adoption worries me.

We can’t fight Microsoft with “don’t choose them, remember what they did to you before?” Fear is lame. Instead, this is a wake up call to Adobe, Google, Yahoo!, Amazon, IBM, Sun, [insert other developer / platform players] to get kicking.

We can’t just be Open, we have to be better!

12 Responses to “Microsoft say Game On; Thoughts on PDC”