There has been a lot of news in the mobile Web space.

At Adobe Engage, Kevin Lynch showed screen shots of AIR running on a phone and gave a sneaky demo of it running on a tablet running Windows on a Nokia device (Nokia will probably end up with devices running everything :).

We released Google Gears for Mobile. Although the first release is for WinMo only, we actually have something that you can use right now and third parties implemented solutions in very short order indeed. I can’t wait to see this spread to other devices.

The future is mobile…. soon.

I wonder if 2008 will be the tipping point over in the US where we see more developers targeting mobile versus desktop. I am sure it is going to happen some day…. but when is that?

Kevin Lynch at Engage told us that he believes we will be developing for the mobile form factor and extracting desktop interfaces from there, rather than the other way around.

I am twittering the Engage event using hashtags. 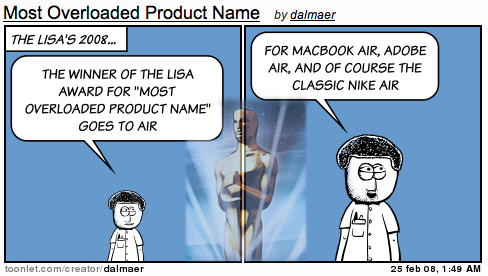 In honour of the Oscar’s, which itself honours those of us who make millions of dollars for doing their job, I thought it was time for the geeks to have their own award show. This is the first in a series that awards a Lisa to those that deserve it.

To start with, Adobe announced Air today, and they win the award for “Most Overloaded Product Name” :)

In all seriousness, congrats to the Adobe team for the 1.0 release!

If Ryan and I were in marketing then we would be talking about “making your iPhone applications BREAAAAATHE” or something ;)

Ryan has a wrapper that lets you run iPhone applications inside of the AIR container:

This implementation just uses the mx:HTML tag with the location set to http://iphone.facebook.com with some extra code to handle the custom chrome and the option to make it transparent. Ideally I could take all of the source code for the iPhone application and have all of those files locally installed with the application but going through that code was more time than I had. You’ll also notice that it just refreshes the entire page. My plan is to go through the iPhone facebook code more and call the function that loads the feed information and just refresh that. I’d also like to be able to detect when a new feed item comes in and bubble that up so I can show a notification but detecting changes to the DOM isn’t easily done with AIR so I need to check with the engineering team. I’m going to have some followup posts this week discussing little parts of the application and I’ll also post the source code later this week (I just need to clean it up).

This is a natural fit for certain applications such as Facebook. Doesn’t this application now look a little like Adium sitting over there?

This, once again, gets me back to Face IM. Similar form factor, just add a few more abilities than you get with the iPhone client (which is optimized for having a crappy keyboard etc).

Ryan, we should get together and hack on this bad boy sometime!