Lisa Awards: Most Original Name for a New Language 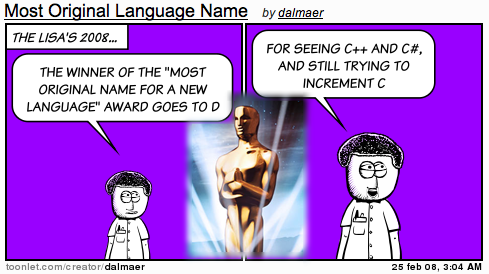 You have the originally named languages of A, B, and the popular C. Then Bjarne Stroustrup gets clever and goes for C++. Anders comes along with C# and adds the musical touch.

Walter Bright creates a language that “originates as a re-engineering of C++, but even though it is predominantly influenced by that language, it is not a variant of C++. D has redesigned some C++ features and has been influenced by concepts used in other programming languages, such as Java, C# and Eiffel.”

Walter then named the language …. D.

Other entrants are of course E, and the very new Arc.

3 Responses to “Lisa Awards: Most Original Name for a New Language”