The rise and fall of webOS is an epic tale; webOS != Web OS Can this tablet thing be a massive fad?

Messages Beta, iCloud, Apple ID, so near yet so far.

I’m really surprised just how bad the Messages Beta is and it seems to get worse with time. And sure it’s a beta but aim *used to* work well

When I installed the Messages Beta, I was surprised to launch it and see two world colliding in such an obvious way: 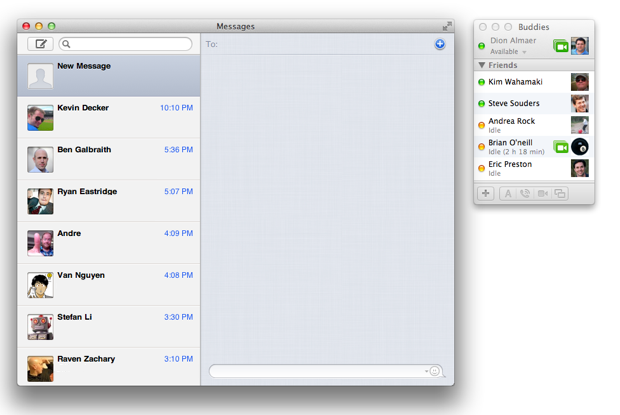 One window from each world…. from AIM and iMessage. I agree with Francisco on how weak the beta is, and it once again got me frustrated on how we are far from the unified world that Apple has the power to make happen in their eco-system.

My assumption when iMessage came along was that finally my phone number and email (and Apple ID) were all joined together. The fruit of this would surely be the following: when someone sends me a message to my email, the Apple system knows my phone, and that it isn’t available on the iMessage system, and thus I end up with a text message. Now that, would be magical. Instead I found myself confused in a sea of “OK, so if you iMessage me using my email it will get to my various devices, but now I can’t text message you back”.

It was the same feeling that I have had with Apple ID’s for some time. In the world of my home media, I want to be able to share my media across the devices that my family uses. Ideally there would be a root account of some kind, but I could delegate, so my wife could see and share all of the media too. Instead I end up in a world of setting up the store / home media sharing with one ID and making sure they are all in sync.

Then we have iCloud.

It feels like we are so close to a system that “just works”, yet right now…. it feels so far.