My iPhone stopped working, and was fixed with a technical solution Google Gears: Upgrading from a 1950’s Chevy in Cuba

GWT and Flex at JavaPolis

JavaPolis is a fantastic conference. Denver is a city that feels like a town, and JavaPolis is a large conference (3200 this year) that manages to feel like a community. It all comes from Stephan and his great team, all volunteers, at the top.

One advantage of speaking at the conference is that you get to talk in a movie theatre. This year, they perfected the experience by having a picture in picture situation that showed speakers and slides together. Like this: 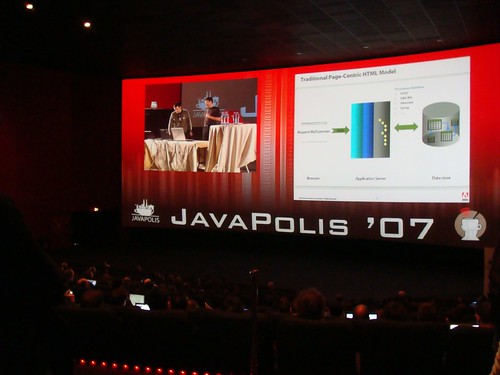 When you go to the same conference year after year, you get to pick up on memes. This year I was a little surprised by some of them.

I have seen that GWT is successful (way over 2M downloads now for example), but at last years show most of the people talking to me about it were doing so in a “I think I will check that out soon” manner, with a few users.

This year though, people from all over were talking to me about fine details, and about their many projects in production and development. At this point they had gone through a couple of the GWT releases too, and I was often told something like this:

I love the fact that every few months a new GWT comes out with a compiler that makes my applications significantly faster.

The compiler updates from 1.3 to 1.4 and to the bugging 1.5 are quite impressive. Quite a few folks were running on head and I was told “I am so glad that someone just checked in support for Enums at last!”.

I also found it interesting that the majority of people were using GWT-Ext, and that Mattias Bogaert was funding the update to Ext 2.0, which I am excited about (I worked on an Ext 2.0 toy on the plane trip home that I will blog about shortly).

Now, some of the usual suspects were talking about GWT such as Didier Girard, who I got to finally meet. He is such a nice bloke, and told me about a few GWT related libraries that I need to check out. He also interviewed me on video, where I gave an honest account about my Ajaxian feelings. I also met Cyprien Noel, of JSTM4GWT, which is an interesting object replication framework for GWT. I am interested to see how it would work with Gears.

But apart from these season vets, I also talked to companies that have poo-pooed GWT in the past, and are now picking it up, or thinking about doing so.

This all being said, this is a Java conference, so you would expect to see a higher number of “give me Java not JavaScript” folk, but I was still astounded by the numbers. I really think that GWT has reached a tipping point.

One of the morning keynotes was a split session, with the best piece actually being Stephan and Ben showing off their new Flex/AIR-based parlays.com. I got to interview them about it, and will get it up on Ajaxian at some point soon.

It is really well done, and although Stephan bleeds Java, he realised that for what he wanted, Flex was a good choice. He even tried JavaFX but of course, it is too early.

This wrapup of this keynote tells the story on how truly poor the Sun session was. Wow.

Adobe had a booth, a keynote slot, and lots of talks, but there was no better advertising than seeing this application.

Of course, it was a pleasure seeing the usual suspects in Europe, and having a fun time with all.

3 Responses to “GWT and Flex at JavaPolis”