Google Latitude; Get your explaining ready Internet Explorer: Microsoft and the EC 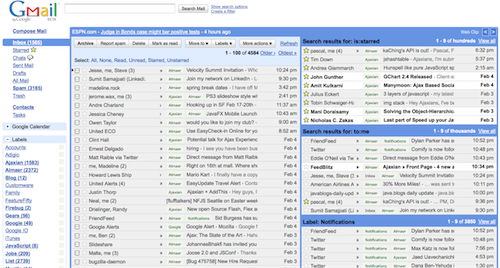 The new multipane view for Gmail by Vivi will change my workflow for the better. I have placed views to the right of my inbox that show me:

Very cool indeed. There are pain points though. If you are not plugged into a nice 30″ monitor, your real estate gets cramped fast. You can choose to put items on top, bottom, or right, but right is the only option that makes sense to me.

I want to be able to have fine grained control here. Gimme a splitter so I can choose how much space to give. Let me put some on the right, some on top, some on the bottom. Let me show and hide items so I can shoot open my inbox to be full screen when I need too.

Selecting items on the other panes is strained. You don’t have checkboxes and the arrow keys to help you over there. I wish that I could click on a space on the very left and have the “>” item show up there so I can move around and select things. I hate the mouse.

I am curious to see how I like this, and how it changes me Gmail usage. Do you like it?