Application trust models; Expanding Web applications out of the sandbox App Discover: An add-on that shows me when apps or user scripts are available for a site

Frustration with online games for kids

Sorry, you must have a Windows PC and Internet Explorer 5.5 or greater to play this game

Excuse me? This is exactly why I joined Mozilla with Ben. I don’t want to access my bank in 2010 and see “You must be running Silverlight on Windows with IE 9″. It sounds crazy, but think back a few years and we were there. And, this message from a Dora the Explorer game reminded me that we still even have that problem today! 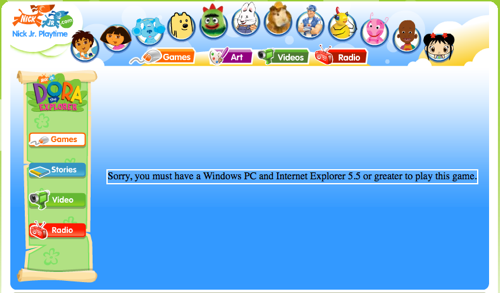 This brings me to online games. There are so many (mainly Flash) games for kids online. It is fantastic. I play PBS Kids games such as Curious George with Sam for hours.

The problem I run into is that because they are simple little games, they don’t have the notion of saving a game, or going to a level. I can see why the creators wouldn’t put this in. It is more work, and they probably think “these are quick little games, who needs that?”

The problem is that kids tend to get addicted to a game and want to play it again and again and again. Sam will want to go back to play, and it is so annoying to play the same first level once again! Let me skip!

And then there is losing the game. Kids get so attached, that I dread the following interaction (which has happened):

Kids really care, so game sites, please add rather than deleting if you can. There is a kid out there that loves the game, and you break his heart when you nuke it. The good news is that 5 minutes later he is onto the next thing…. but still.

Any other parents run into this? Any favourite games?

11 Responses to “Frustration with online games for kids”