Chrome Speak To Site; Give any input the power to listen to you HTML5 is a jewel that we need to cut into a weapon 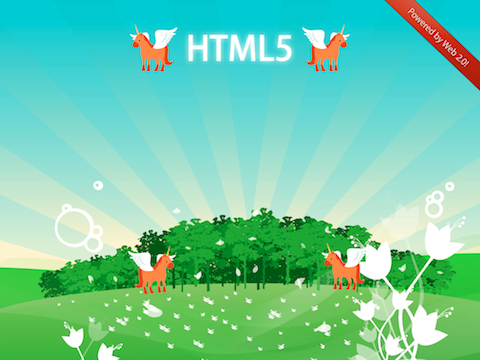 Philipe of the W3C has been quoted telling the world that HTML5 isn’t ready yet and that you shouldn’t “deploy HTML5″. This is sparked the old debate around when HTML5 is ready, and the haters can come out and talk about how long it takes etc etc etc. Here are his words:

“The problem we’re facing right now is there is already a lot of excitement for HTML5, but it’s a little too early to deploy it because we’re running into interoperability issues. The real problem is can we make HTML5 work across browsers and at the moment, that is not the case.”

In the meantime, great developers are delivering next generation experiences on top of new modern features that many browsers have implemented TODAY.

The Web platform makes it very possible to progressively enhance (or regressively!) your application for the fast growing segment of the population that has a fantastic modern browser.

Thus, I utterly disagree with Philipe, and instead emplore you to think about what your site or app can be in 2010 with the new capabilities. The Ajax revolution was a hack, and with modern “HTML5″ browsers we finally have a fantastic runtime with great graphics performance (hardware accelerated up the wazoo [both CSS3 transitions/transforms/animations and Canvas]), amazing JavaScript runtimes, the ability to get off of the main UI thread (Web Workers), much better offline and caching support (Local Storage, Web Databases, App Cache) and much much more.

Take a look at the demos from the IE9 beta event, Chrome Experiments, and Mozilla Hacks for a glimpse at what is coming. Users expectations of the Web are just about to be changed again. The day that you used Google Maps for the first time was the day that MapQuest seemed AWFUL. As soon as the bar is raised, you can’t go back. What side of the bar do you want to be on?

Disclaimer: There are real tradeoffs with the Web platform being an open standard with multiple implementations. The platform is diverse and not always uniform. It is our job to rally browser vendors to fix things. For example, Microsoft is doing great things with IE9, but they need to add CSS3 transitions/transforms/animations as soon as physically possible. I would like to think that Philipe meant more to highlight the tradeoffs and not discourage developers. But man, the W3C can really drive me nuts.

Remy Sharp has some nice ranty thoughts on the topic, too.