HTML5 is a jewel that we need to cut into a weapon Open Web Apps: The Vapour infrastucture becoming real I love the Twitter for iPad application and how Loren et al have built an experience that feels right in your hands. There is one bug though that can drive me crazy, and that is the fact that the unread state of direct messages is broken. It feels like 99% of the time I will open up the application and the last 20 messages will have unread:true, even though I know I have read those messages. The bug is particularly irksome because it is so in your face. The messages tab is highlighted as though there are no items even though I know there is nothing new for me (and I just need to go through again and mark them all as read? ugh).

It made me wonder how Twitter was handling the state of direct messages. In creating Facebook for webOS we built out FB messaging, and the state was handled for us. The Facebook design has the notion of threading baked in (as apposed to email for example) and is as follows:

So, where is the unread flag kept? You may think that it is at the message level… after all, it is a message that is either read or not. However, the thread actually controls the flag for Facebook. This means that in a conversation there is basically an int count that shows you how many messages are unread. If zero, then all messages in the thread are read. There are trade offs on having the unread flag be a count and not a flag on the message layer, but the high level point is the core platform is keeping track of what a user has done. Whether you go through the website, or any application that speaks the Facebook API, as long as your application doesn’t cache too aggressively, you will have a good result. The key becomes: as the platform developer you very much understand that the service is the master, and you need to be smart about caching data to give your users a responsive interface, but make sure to sync on the data to make sure it is accurate. 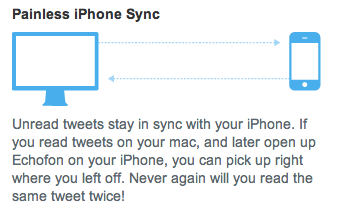 The Twitter API on the other hand doesn’t appear to keep any unread state for messages. Echofon is a cross platform client that showcases its support for syncing this kind of data. It is a nice feature for them to be able to differentiate on, but man….. it sucks that they have to write it!

I hope that Twitter starts to own the state so we aren’t in the current situation of no one really knowing my state, and it has been interesting to see the different state of affairs, and have you thinking about what the platform should be doing, and what should be left to the clients of said platform.

6 Responses to “Do you want your service to keep state for you? Comparing the Twitter and Facebook APIs”