Silent updates: Good, Bad, or Safe? Tough Love: How Steve could make us all like Flash more 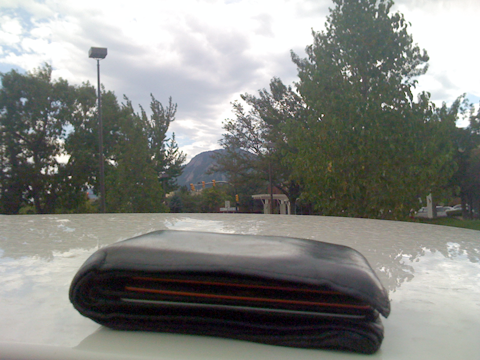 The last week and a smidgen have been very surreal when it comes to wallets, and losing them. This is a Yin and Yang tale of losing wallets, and what happened to them. I get to play the part of a Baboon as I earn a mention for the Darwin awards with how I lost my wallet.

But, first, wallet number one:

Emily and my family were enjoying some time in Union Square, when at some point during the trip, Emily come to realize that her purse had been stolen out of her bag. It would be an easy thing to do for anyone who wanted, as she was carrying Sam, our two year old, at the same time.

Just in case, we looked all over, but as soon as I checked out account we saw that the person had indeed started to use it. It makes you sick to think about someone running around with your information. The purse had so much in it. Knowing the pain of replacing every little card and detail was going to be a royal pain.

Oh, and this happened a day before we left for a trip to Colorado. Bad timing. It meant a real pain when we got to pick up our rental car…. but that is another story.

The only silver-lining to the entire thing was learning how the cards were being used. The thief was buying food (we like to think it wasn’t booze :/) from the local food store. Maybe they needed it more than us? Emily has the fun time ahead of calling everyone, and going to the DMV for an enjoyable replenishment.

I was up in the mountains, in Eldora Colorado. I still wanted to record a Code Review show for the Google Developer channel, and since I wasn’t at the Googleplex why not use a nice background?

I was staying right next to a stream, which is beautiful, but turned out to be too loud. I hunted around and found a spot which the mountains behind, and the old town ahead. Now the only problem I had was getting the shot. It took some time, but I ended up with a MacGyver solution involving the top of the car, a battery, and my wallet.

After I finished the recording, I went to review the footage, then threw everything in the car and drove back to the cabin.

But of course, I didn’t throw everything in there. I left the wallet on top of the roof of the car! Thus begun the two hour hunt for the wallet. Since it could have stuck on for awhile, the end could have been never-ending, but after a couple of hours we called it a day. In the meantime I had called the local police station, and then went to work calling the credit card companies and the bank yet again. They must think we are nuts. We only just got our new cards!

Ok, all done. I am an idiot, and I have lost my wallet. Now we both don’t have drivers licenses. Luckily we have our passports on us so we can fly back home hassle free.

After a night of cursing my idiocy, the next day brought fantastic luck. The cabin that I stay in up in Eldora has no cell phone service. I did get Internet which is great, but we have to rely on the land line. Thus, it was very surprising when at noon my cell phone started to ring. How could that happen? There is no service up here! By the time I answered the connection died, but it was long enough to show who had called. A local 303 area code, yet no-one that was plugged in as a contact.

Probably a useless call, but wait a minute… maybe it was the police station? I quickly called back and it wasn’t the police, but rather my bank. Someone had dropped off the wallet at the bank local to them and they had it!

They closed pretty soon, but we piled 5 kids into the car, shot down the Boulder where I dropped off the kids and mums, and kept going to the bank to pick it up. Although I got there 10 minutes late, they had enough pity to wait for me. I also had two babies in the car sleeping.

All very bizarre. Whoever found my wallet (didn’t leave any info) thank you so much. You didn’t take the $100 bucs, and yet I would have been fine if you did (a reward). You are a true champ, and so different to the person who stole Emily’s purse a week prior. What a change a week makes.

Oh, and here is the video that caused all of the pain: