Having fun with Canvas, but the aim is to have to use it less and less; Performance wars move from raw JS to DOM When a “Web OS” hits, it will be so much more than a browser launcher!

Code Dimensions; How can we write code in more than 2D? 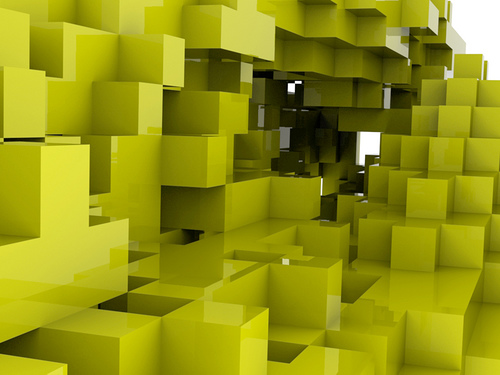 As I think about a lot of the features that excite me the most about Bespin, they tend to break up into features that connect people, and those that add more dimensions to the software development process.

When I look at the evolution of editors, we have been mostly stuck looking a files, with the odd perspective on top of that (e.g. show me class diagrams). We have used tools like VCS to be able to go to different points in time, but I haven’t seen a popular editor that does much more than that.

One feature that I am excited about in Bespin, is the ability to have a “time machine” construct. I want to be able to flip around in time and see the code change before my eyes. On the timeline, I should be able data points such as: when commits happened, issues that track to the code, code size, who worked on it, etc.

I would also use this feature a lot casually. For example, to view a new commit that came in, I could simulate walking through what the developer did with that patch and grok it inline instead of staring at a huge diff. When you add the dimension of time to the tool in a deep way, I think developers will be able to add a lot of interesting features to help them visualize and produce great code.

I wish I had better pivot tables for my code. We often make choices on how we compose our code modules, and there are always tradeoffs. Do you put your cross cutting concerns into the objects so when you look at one object you see it all? Or do you put the same things in a separate area so you can see “all the times I do X”. We run into this issue in spades with meta programming, where it can be hard to see everything that is going on.

Rather than having to make a choice, I want to pivot my code on the fly. I want to be able to ask my code:

I am interested to see if there is a way to easily get at my code in new ways, and also be able to make changes and have those changes go back to the right place. This is tricky…. but intrigues me.

Why am I not being told more about my code? It feels like I have to poll my tools all the time, and they don’t tell me much. Granted, I get help with syntax checking, incremental compilation, completion… great stuff. But, I want more.

There are a ton of heuristics that we can do on the client and up in the cloud (aside: fun little jap on cloud “#chromeos reinforces my belief that cloud computing is just mainframes with rounded corners.”)

This isn’t just about code, but also about the project lifecycle too. I need to write a separate post on that, and what is doing in that area.

I just happened across Code Canvas, a prototype zoomable UI for looking at a code project.

It is exciting to get time to think in the developer tools space. There is just SO MUCH that can be done to make development more fun and productive. By adding in low level hooks to multiple dimensions, I hope that we can do a lot more. What would you like to see?

7 Responses to “Code Dimensions; How can we write code in more than 2D?”