“How exactly do you make your paints?”; What if Google hired artists? Feeling Touchy; Learning how to build great touch UI

Building an Web application from the inside out; Using node.js to bootstrap a server from client JS 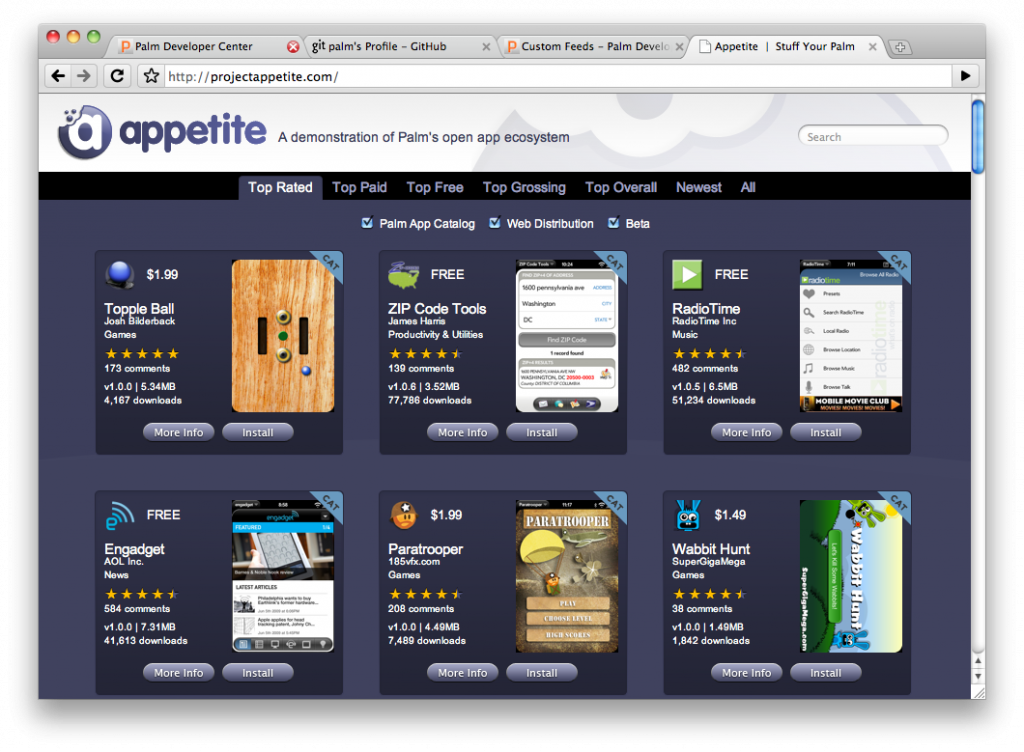 Over the winter holiday, Ben and I whipped together Project Appetite, an open source example that consumes the feeds from the Palm application ecosystem (both Palm Catalog and Web distribution). We didn’t have long to come up with something, and one of the interesting stories was how we took an API and mocked up the middle, allowing server and client to get going quickly.

The feeds that the Palm ecosystem puts out are RSS 2.0 XML feeds, with extra catalog-y info in an “ac” namespace. We converted the format to JSON to make life easier for the JavaScript client consumer. Although you can DOMParser() away (and use the Microsoft component) JSON is just so much easier. What lives at api.projectappetite.com is the result of the munging, so others could consume JSON directly if they so wish.

We quickly put together some dummy data, and for ease, put it in a file app.js that the client could consume. Once we iterated on the format, one of us could go off and write the XML to JSON code. We actually implemented this in a variety of ways as we experimented. Ben created a simple JDOM translation, and I fought with databinding, which still seems to be a royal pain with Java. The reason I checked that out was to create an open backend on app engine, and I wanted to go from XML to JSON to Java for persistence via JDO. From one set of Java objects I could @PersistenceCapable and @XStreamAlias("asset_url"). It wasn’t worth the effort.

We created an Appetite object that would be able to query the model and get the data that was needed. The constructor took the apps data, and then it did its magic. In this case is created some caches to make querying fast.

Very quickly the client was mocked up and the frontend was build out using this API. Again, at this point the entire front end could be built without waiting for server infrastructure.

Since the client API mocked out the functionality needed for the frontend, the server could actually reuse this logic. This is when the node.js server was born.

To play nice with node, we went back to the other files and added logic to export the data. E.g. in the client.js:

Once that was in place, we could load up all of the information that we need:

And then we can get access to the client API via:

We created a simple mapping that enabled a URL such as /app?id=[id]&locale=* to be converted to a method call of app({id:id, locale:locale}). We did this in a generic way that enabled us to add URL endpoints by simply added to the responder hash. The functions would return an object that could contain error codes and the like.

For example, the app end point:

We also added a magical DEFAULT handler to take care of bad URLs.

Finally, we would boot up the listening server and handle responses:

After 86 verbose, commented code, we had a server that would respond to URLs and return data. And in this time the frontend continued to be built out.

Being able to reuse the client JS and wrap it to become a server was a lot of fun. I am definitely a big node.js fan! Now, I am looking forward to doing a lot more with Project Appetite…. but for now we are working on a pretty cool webOS application, and getting the developer platform better and better.

Some coffee in your Node

In an aside, the node hello world has been ported to CoffeeScript: