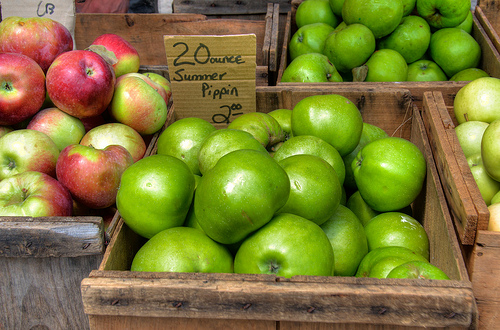 I remember growing up walking past grocers and butchers, and having my Mum stop by to get fresh meat and veg on a daily basis. I look back fondly on that experience, as I contrast it to the later years of mega-stores. When I came back to England for a year stint, a few years back, I was shocked to see that Tesco didn’t just sell food anymore, but had branched out to credit cards and gas and lots of crazy things.

The local stores have been wedged out.

On Sunday, I took my kids to the farmers market (happens most weekends), which is what had me think back to the local stores from my own childhood.

I worry about the food chain these days.

Another sector that I think about is app economies and app stores. I have talked about what an open marketplace could be and Pascal Finette of Mozilla Labs has been doing a lot of thinking in this area.

Fast forward a few months, and we see a new project in a very early stage. Vapour (github repo has been removed) is the Mozilla Labs project that is “An experiment around an Open Web App Store.” I am excited about the project for two reasons:

Also, I got to hang with the OpenAppMkt chaps at the Node Knockout get together last night. They have only just begun, and think they will do some great things.

I evangelize the farmers market. I market it. I try to sell it.

I think of the Mozilla effort as the farmers market of app stores. The values are different. It isn’t just about values though, it will be about product. Many folk go to the farmers market because the goods are better. It is incredibly hard to compete with the likes of Walmart. They squeeze the market and force their vendors in a race to the bottom around price. This is the trick that Walmart can play. They can hold on to: “Look, we are giving everyone cheap goods!” It doesn’t matter what they do with China, or how they treat workers. Surely it is all for good if we can get things cheap right?

The same is happening with the major app stores. These platforms sell consumers with a fantastic user experience and looking after their users. No viruses. No “bad stuff”. Clean. They offer true value, but there is always a cost.

The app markets are as strong as wal-mart. I am excited to see new endeavors that change the game and deliver great user value, while also giving great freedom.

One Response to “App Stores: Showing users the value of Farmers Markets compared to Wal-mart”