Internet Explorer: Microsoft and the EC Launching Bespin; Feeling light as a cloud

Will the real WebKit please standup 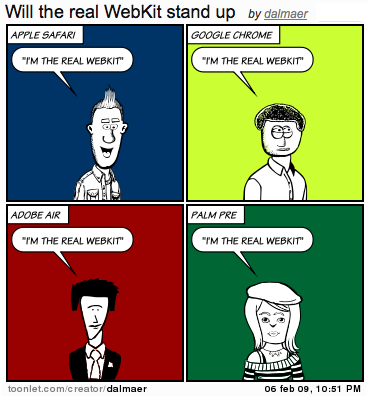 I recently heard a conversation in Palo Alto which had the following in part of it:

I have heard this before. I am running into this issue myself right now. Something that our team is playing with uses some bleeding edge standards, and some recently were added to WebKit nightly. Unfortunately, that doesn’t mean that they are in Chrome, AIR, Mobile Safari (in this case it is), or the other people who use and fork WebKit (from Nokia to Titanium).

On the one hand companies are highly leveraging each others work when they choose WebKit. Forking isn’t necessarily an evil thing anymore, especially if everyone is giving back to the cause as much as possible. The WebKit team implements CSS Animations, and you hope that it will be placed in browsers that use WebKit in the future. Watching the WebKit community deal with the many large companies will be interesting indeed in the coming couple of years. Luckily, the core team is top notch, and continue to push forward.

6 Responses to “Will the real WebKit please standup”