Business Time at Google I/O – Flight of the Conchords Being Open is hard, as we have seen this week

The Bay Stack: Ever notice how Silicon Valley stacks up just like technology? 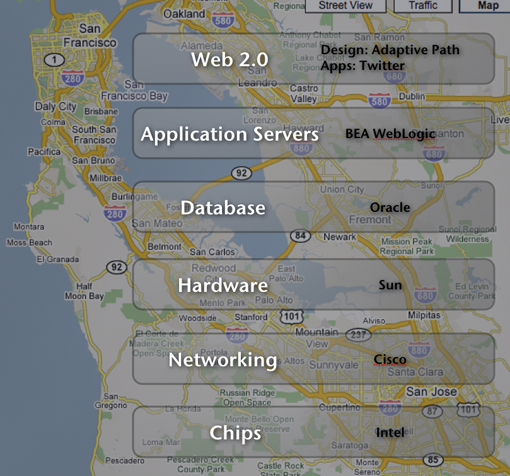 I was sitting in a session at Web 2.0 Expo last week with Salil Deshpande, one of the original investors and advisors to Ajaxian and a former boss at CustomWare. (Salil is now a VC at Bay Partners, and you can follow his new blog here).

We started on the observation that the bay stacks up with technology somewhat similar to a stack of technology itself. We then took the analogy to the extreme as we plotted it out, as seen above.

At the bottom of the stack you have the hardware crud, such as chips (Intel), networking (Cisco), disk drives (Seagate) and hardware (Sun). The operating system should go next, but that was a tough one to squeeze in. Oracle and the database is up in Redwood shores. BEA is further down in real geography, but Oracle has now bought BEA, so it also lives in Redwood shores (phew, thanks for the purchase!).

Then you get up into the city itself, where the hipsters define Web 2.0 (Twitter) and design cool things (Adaptive Path).

And what is missing?

O’Reilly is further up in Sebastopol, above the city. Maybe that is symbolic of Big Tim watching over the entire stack and giving companies, and the public, advice? :)

And what about the big Web folks such as Google, Yahoo, and Facebook. They are in Mountain View, Sunnyvale, and Palo Alto… which is in the middle of the stack. Maybe that symbolizes how they are “everywhere”.

Anyway, thanks for staying with me on this pointless analogy. What did I miss? :)

One Response to “The Bay Stack: Ever notice how Silicon Valley stacks up just like technology?”