Posh Mama? The QVC of the Web is here 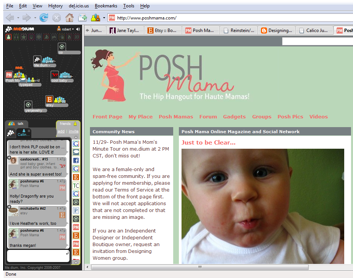 I was hanging with Tobias Pegg, who not only has the coolest British name, but works for Me.dium, the company that is trying to bring social browsing to us all. He was about to login to an online tour with Posh Mama, and I had to ask who they were and what was he talking about.

It turns out that a tour guide, and even the community itself gets together on online shopping sprees. The group gathers at Posh Mama and then floats around seeing what is out there. Since you have everyone browsing together, you can get effects that you get in the real world such as:

Hey, Susan don’t buy that on Amazon, you can get it on Foo.com for 10% less. Let’s head there quick.

I have to admit to being a touch surprised, as it made me realize that a bunch of 40 year old mums were installing the Me.dium plugin and doing this stuff. I know that it isn’t that hard to install a plugin, but I also know that my mother doesn’t do it often!

When you think about QVC and the other home shopping networks, you think of a bloke and a bird up on a stage saying “it slices. it dices. yay!” and the odd phone in. With the Web, it can be a social experience where everyone interested in the item can talk about it, learn from each other and you could imagine this group getting quite tight nit. Very different than one person watching the boob tube.

Of course, another side of things is $$$. The tour guide, or the entire community, can setup affiliate networks and get paid commission for taking people on their consumer binges. If you get a big following, I could imagine that you could get some serious money here.

We are watching the same phenomenon as we saw with media. Moving from traditional media such as tv networks and book publishers, and over to bloggers and YouTube uploaders. Now you could be the next online professional shopper!