Last week I shared the WhereAreYou? application that used the Ajax APIs ClientLocation API to access your location via your IP address.

At the same time, we announced support for the Gears Geolocation API that can calculate your address using a GPS device, WiFi info, cell tower ids, and IP address lookups.

Add to all of that, the W3C Geolocation API that Andrei Popescu of the Gears team is editing. You will notice that it looks similar to the Gears API, with subtle differences. The ClientLocation API is quite different.

To make life easier, I decided to put together a shim called GeoMeta that give you the W3C Geolocation API, and happens to use the other APIs under the hood.

To you the API will look similar:

At least, that is what I would like. Unfortunately, there are a few little differences that leak through.

There is some fun implementation code in there if you poke around. For example, for the ClientLocation API, when you make a call, it will be added to a queue if the Google Loader hasn’t fully loaded yet, and it will kick off that call when finished. Dealing with dynamically creating <script src> as a loading mechanism sure is fun!

I like the idea of jumping straight to the W3C standard and updating the shim as the APIs change. That way, when browsers catch up, the code will still work using the native APIs and you don’t have to change a thing. 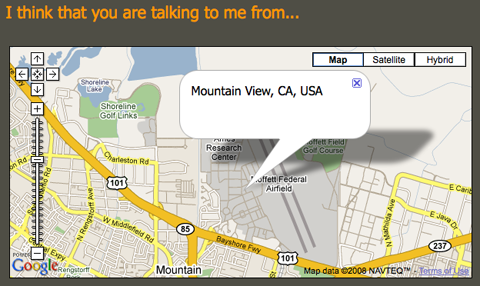 Where are you? Using the new Ajax ClientLocation API

We just announced two new ways to get location info from a browser client.

The Gears GeoLocation API is very detailed. It is able to use GPS, cell towers, WiFi, and ip addresses to work out the location, and you get an “accuracy” parameter to see what was available. As well as getting a position, you can watch a position so you are updated when a change happens. This is perfect for mobile devices that have Gears installed, and since the community is working on the W3C Geolocation spec it should be in many more places soon.

To go with the Gears API, we also have an API that goes along with the AJAX APIs, called ClientLocation.

This is an ip based geocoder that we have made available, and is very simple.

I put together a trivial example called Where Are You? that ties together this API with the Maps API:

You get access to the data from google.loader.ClientLocation, which is null if it can’t be calculated.

Here is a bit of JavaScript that ties it together: