I personally believe that Googlers will produce more open source in 2008 than prior years, and this post will discuss why. The same reasons apply to many other companies, which leads me to believe that we will see an increase in open source across the board.

Google does a lot of open source

When I am on my travels I get enough questions about Google and open source that has me realize that Google does a bad job in showing what a good open source citizen it really is.

Many people do know about the fantastic programs that Leslie Hawthorn and her team puts on which include: the Summer of Code and the Google Highly Open Participation Contest. This is the tip of the iceberg with respect to what the open source group does though.

As I talk to more and more people at Google, I find out about more and more people like Jeremy Allison, or the Samba team, who gets to spend much of his time hacking on the Samba project. There are Linux kernel hackers, Firefox contributors, and then you get to smaller pieces such as Hibernate Shards and MySQL tools.

If you have a butchers on Google Code itself you will find 135 current projects from Google, and this doesn’t include the magnitudes more that Googlers contribute too. 20% time really helps here of course, and it is a popular choice for engineers to dabble in the open source world one day a week. I can imagine the situation of working on some internal project, potentially something that is hush hush and secret, and having the option of spending some time on something very public indeed would be appealing.

So, we contribute a lot of open source code to various communities, we put out a bunch of our own code, and of course there are a number of high profile projects that have open source components to them: Gears, OpenSocial, and Android.

Erm, so if that is a lot… how come more?

Now I have hopefully shown a glimpse of the top of the iceberg for the amount of open source development that Google does, you may be wondering why I think 2008 will be ever better. Is it a numbers game based on the fact that we are constantly hiring more top notch developers? Well, that will hopefully help.

The core issue is that “doing open source” can mean many things. The code side of it is often the easiest part. Then you have the legal crud. What can be really challenging though is the process, especially when you have legacy code and procedures which everyone but the newest startups have (and the startups will have them soon too, as things change again).

Google is known for its engineering practices, and tools that help make them happen. I think that we do a really good job at providing a process that makes sense when you have as many programmers as we have, but not being heavyweight. A constant tight rope walk for sure.

One of the tools that has been talked about before is Mondrian, a Web based tool written by Guido himself, to help the review process of code. It is the kind of tool and process than if I left Google I would want to replicate, and would miss.

It is well known that Google uses perforce, yet most open source projects are using Subversion, or Git, or [insert your favourite new shiny toy]. This leads you to a problem when you decide to open source some code. How do you manage the fact that your code AND TOOLS are for X, when the open source world wants Y? If you are lucky, you can do a dump and have everyone using the other land. That sounds like the simple solution, but what if that code is being used in other projects within your company? This is where the real world gets complicated.

In many enterprise companies that I have had the pleasure to work with:

It is common for these process issues to be so painful that doing the open source thing isn’t worth it!

A lot of companies are still working out how best to handle these situations. It is easy for a small new company to come along and base its work on open source. You use what the open source world uses, and your life is easier. This shows how it can make sense to go down this path and favour open source software where appropriate. If you think that you may open source some of your code later, or want to integrate with open source, why make it hard for yourself?

One way to help with the friction is to open source more and more of your own code. You quickly find that although you thought you were just open sourcing Foo, you actually need to open source a slew of dependencies, and it would help to open source some of the tools too!

I only just ran across Review Board, which looks a little like Mondrian with support for various VCS. Promising indeed (Django/Python app).

Google is getting better and better and handling these issues, more and more tools and libraries are open, which means the path to open sourcing code in new project gets easier.

This is why I think that 2008 will be a fantastic one for open source at Google, and throughout the development community, as other large companies get better and better at it too.

What do you think? Have you run into these issues? 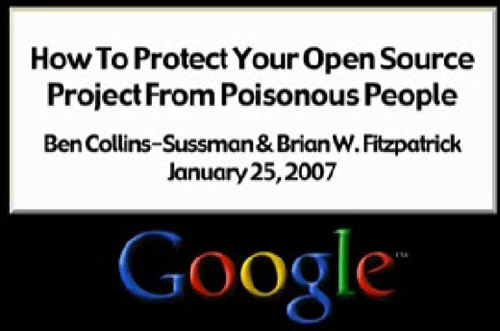 2 Responses to “Prediction: Google will produce more open source in 2008”