When I heard that Facebook had released a more FriendFeed like version I was excited. Maybe this would bring me back into the Facebook world that I have pretty much left alone as a destination (now using FriendFeed and Twitter more, even though that means I am in tech-friend land).

At first glance I liked it. The river of news flow, the un-boxiness. Good stuff.

I quickly ran into flaws though. I wanted to upload my video on monkey balls (not what you think) and I got a “hey you need to allow popups”. Really? Isn’t this going backwards? The video upload experience has always been top notch on Facebook, why ruin it now?

Then in the popup it completed but with no way to save the info. I opened up Firebug and found this: 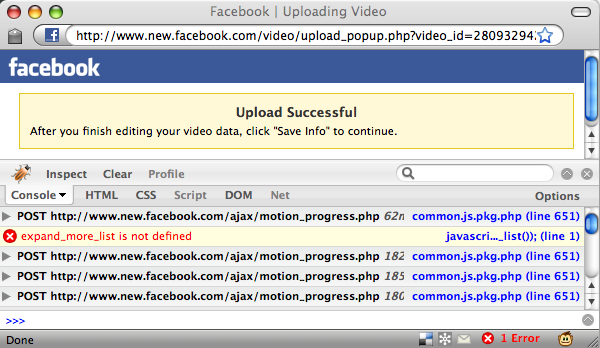 If I didn’t despise the phrase “FAIL” and “EPIC FAIL” I would have used those terms. To get the video up there, I had to go back in time and go to the old site, but this unfortunately took any changes with it.

The second frustration is the way that actual useful content has been striped from the mini-feed.

Take a look at this: 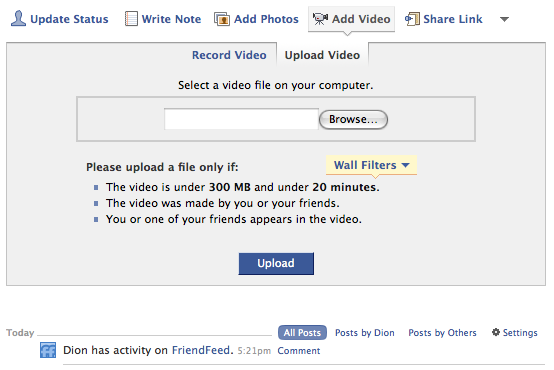 See the Dion has activitiy on FriendFeed post? Are you kidding me? My river of news now has millions of those which tell me NOTHING. I want the opposite. Given a choice I would rather see “Dion said that Facebook has some rough edges with its new version” with no mention of the FB brand other than the icon say.

Overall I like the new look, but there are definitely things I want to see ironed out. You?