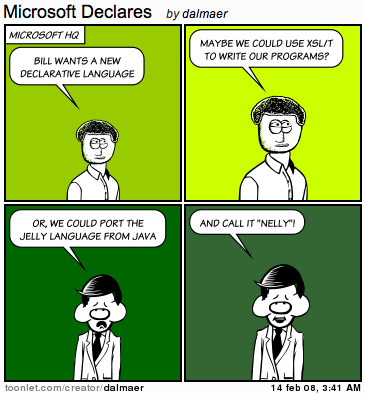 Paul Krill asked Bill Gates about declarative languages and how they are the future (and ironically the past!). Bill talked about some of the work happening at Microsoft:

“Most code that’s written today is procedural code. And there’s been this holy grail of development forever, which is that you shouldn’t have to write so much [procedural] code,” Gates said. “We’re investing very heavily to say that customization of applications, the dream, the quest, we call it, should take a tenth as much code as it takes today.”

“You should be able to do things on a declarative basis,” Gates continued. But this has not caught on partially because of weak data models — first Codasyl and then relational. Stronger data models since have emerged, such as rich schemas around XML as well as modeling work being done by Microsoft and others, Gates said. “We’re bringing the data models up to be much, much richer, and we think in that environment, a lot of business logic can be done in a declarative form. Now, we haven’t totally proven this yet. We’re doing a lot of internal developments ourselves that way,” including some Microsoft business applications, he said.

“We’re not here yet saying that [a declarative language has] happened and you should write a ton less procedural code, but that’s the direction the industry is going,” Gates said. “And, despite the fact that it’s taken longer than people expected, we really believe in it. It’s something that will change software development but more like in a five- to eight-year timeframe than overnight,” he said.

I am guessing that the work of Doug Purdy, ChrisAn, and Don Box is fitting into this world, as well the mentioned work of Brad Lovering.

But…. maybe the future is a port of Jelly ;)