Luke and Darth talk past each other on language debate Finding the right abstraction; Not repeating the same mistakes

IE Wishes; Time for a “Best Viewed In Any of These..” day? 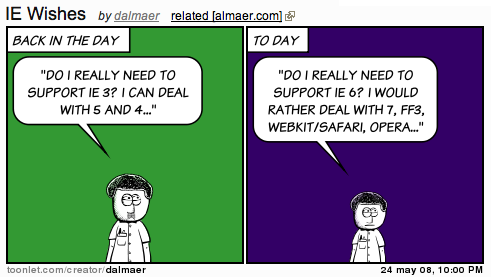 I have been hearing the same tune recently, and it escalates: “Man, if we could just not worry about IE 6.” It sounds familar. Every few years, we get another popular but lagging usage that holds us back.

Imagine if the majority of people were still using phones from 2001 too: Oh wait, sometimes it does feel that way doesn’t it?

We shouldn’t be blaming IE 6 itself of course. When it was released it was a great browser. We can’t forget how Microsoft had a large part to play in pushing the Web back in the day, bringing us DHTML itself, and offering up features that never caught on as people saw them as proprietary (behaviours are awesome for example).

So, we can’t blame the IE 6 engineers. We can get a little frustrated with the fact that new machines still come with IE 6 installed on them, even though IE 7 is out there, and IE 8 is making us all feel like Microsoft could care again.

Frank, Microsoft needs to push the button. The last four times I have had to do tech support for family or friends (I need the “just because I work for Google doesn’t mean that I can fix your computer” t-shirt) they were running IE 6. I couldn’t believe it. Some of these were fairly savvy folks too.

Say we get Microsoft, and IT folk, to push the button and push out IE 7 to the masses, we will still be short on a large part of the users. Namely, the folks across the world that are running Windows illegally. Will this ever end?

Maybe it is time for large sites to start a trend. On the first Monday of the month, when user comes to your site for the first time with a browser that isn’t Grade A you show them some kind of notice that “If you like this site running Browser X, you would like it so much more if you download any of these browsers”.

This isn’t about IE 6. This is about all browsers that are low on the pack. IE 6 happens to be the one that is talked about the most as it has the huge market share as well as being painful. This also isn’t about picking one browser. We aren’t saying “Download Firefox!” We are talking about downloading ANY grade A browser. Firefox, WebKit, or even IE 7!!!!

I never liked seeing the “Better viewed in IE/FF” images, but I think this is different. At some point we need to rev our platform. It is like the cars on the road. It isn’t enough to just improve fuel efficiencies in cars. We then need to get people to get rid of their gas guzzlers and buy the responsible one!