Headless Eclipse, and Smalltalk browsing with Bespin, thanks to Avi Bryant Browsers are finally catching up; It isn’t the Future of Web Pages is it

Exactly what is wrong with education and government; Input vs. Output

Taking sexual harassment training is good stuff. I get it. I support it. However, the implementation is so poor that I had to comment on it.

The law states that you need to take 2 hours of training. See anything wrong with that?

As I took the online class, after the first section (where I got every question right) I faced the following screen: 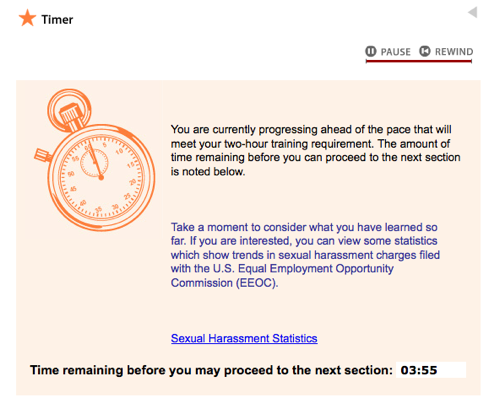 I was “ahead of schedule” so they made me sit and wait for minutes so I would “catch up.”

Doesn’t it make more sense to have the expectation that: “You will understand US sexual harassment law” with an exam that proves it, instead of just “you sat around for 2 hours…. and we all know that why you waited in between you could have just been playing Wii Mario Cart.”

Can we please start to measure on output and not input? If someone answers 100% of questions in 3 minutes, good on them. They know the law.

5 Responses to “Exactly what is wrong with education and government; Input vs. Output”